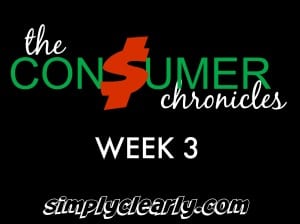 My Consumer Chronicles post is a bit late for last week, due to me spilling water on my laptop, which resulted in it shutting down automatically. I frantically turned it over so any water drops could drain out and let it sit over the weekend. It dried out and miraculously turned back on, so far it seems without any permanent damage. Anyhow, without my computer for the weekend, I had an unintended break from my writing, which put me a little behind.

Back to the topic at hand. Shopping. I have mixed feelings about how I did this past week with my consuming. I actually have very few purchases to report, and really had no urgings to purchase unneeded stuff, aside from wanting to buy an extra box of cereal at the grocery store, which I didn’t because my daughter asked, “Mom, is that on your list?”

Last Sunday, I finally got rid of two very large pieces of furniture we have had in our home, stored for years and moved countless times. My executive L-shaped desk with the hutch, and a matching entertainment center. I woke up Sunday morning and decided it was time to get serious about them. So, I listed them on Craigslist and sold them within just a few hours; for a pittance of what we originally paid.

It was a bittersweet day. On the one hand, I am so glad to be rid of them. They weren’t even half full after all the simplifying we’ve done, and they were monsters when trying to move. On the other hand, it was quite painful to lose them at a fraction of the cost of what we paid for them. It has probably been the most freeing item we’ve minimized, and also the most costly.

This brings me to my purchases for this week. I was still in need of both a desk and something to replace our entertainment center, so, I ended up making the following purchases, somewhat last minute and unplanned since I didn’t think the other furniture would be gone quite so soon –

I think purchasing these items somewhat unexpectedly and spending money I hadn’t planned on spending so early in the week took the shopping urges right out of me for a good few days, at least until I ran into that box of cereal my daughter helped me put back.  🙂  There is one other item I purchased to go with the small nesting desk as well.  I had originally thought I wouldn’t include it in this week’s post, but it wasn’t quite a necessity, more of something I hope will help me.  I had a large leather office chair that went with my executive desk, and with my downsizing and my recent back pain, I decided to purchase a Gaiam Balance Ball Chair.  It was pricey, but so far I love it!  It definitely forces correct posture and eases the pressure on my hips and back.  I had originally thought not to include it since I am not including medical necessities, but, it rides the line between necessity and luxury.

So, there you have it!  This past week’s purchases.  I’d love to hear any feedback you may have about your own successes and/or struggles with consuming.