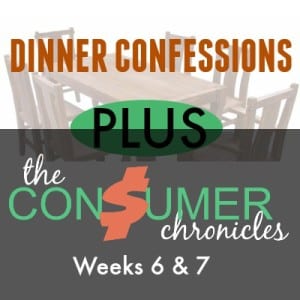 I’ve decided to merge my Consumer Chronicles into a post every two weeks, instead of on a weekly schedule. Basically, I find that I am actually doing better than I thought in this area of life, and I don’t have nearly as many wants and items I am purchasing on a whim as I thought I did. Accounting for my purchases every two weeks seemed to be a better fit and will hopefully give you all a better picture of my habits than a once a week post. So, on to the last two weeks!

Have you ever tracked how many times you’ve gone out for dinner, or lunch, or coffee in a week? A month? A year even? I’m not sure I want to know how many times my family has gone out to dinner in a year, since I am already reeling from how many times we go out in a month, or in two weeks. See, my husband and I have justified it to ourselves as a family ‘experience’, we aren’t bringing any physical items into our home after dinner, so it must be okay and much better than going on shopping binges where you bring back loads of physical clutter, right?

The truth is, we’re tired, and when we’re tired, neither of us want to cook and we can only make the kids eat cold cereal for dinner so many times in a week before we start feeling guilty. Alright, maybe we don’t make the kids eat cold cereal for dinner, well, more than once a week, but you get the idea. I feel guilty when we just scrounge around the kitchen for whatever we can find for dinner because I don’t want to cook. So, we end up climbing in the car and trying to decide where to go for dinner as we’re driving into the restaurant and fast food mecca of our little city.

Why am I bringing this up in my Consumer Chronicles post? This post I am going to bare my dirty secret of when and where we have gone out for dinner or any meals, coffee, etc. in the past two weeks. My husband and I have been having some serious conversations about this the past week, and we are ready to crack down on ourselves in this area of our lives, but in order for me to do that, I need confession. The whole idea behind the CC posts is to help me be more accountable to myself through being accountable publicly. It just works better for me. So, hopefully by confessing my flaws to you all, I’ll find more strength to become better. Thanks for bearing with me! Here we go!

Okay, so now that I’ve written it all out, I’m not even sure I even want to post this publicly, how utterly embarrassing.  This pretty much says, “I really don’t cook dinner all that often.” It also says a high percentage of what my family is eating is junk. Like pizza much? If I really want to get real here, I’ll admit that when we go to these restaurants, we are eating high fat foods, the kids are ordering chicken nuggets and fries and I’m definitely not eating salad. This is really sad, since I’ve been deluding myself that we eat healthy because we shop at a well-known very health minded grocery store for our in between meals. We are most likely canceling out all the nutritional benefits we are getting from those foods with the high fat, high carbs we are ingesting when we go out.

Whenever I know in my gut that a real change needs to be made, I take the same steps. They are tried and true for me, and are most likely the same steps most people take in one way or another when trying to create a new habit or make a serious lifestyle change. Here they are and how I’ll be applying them to make a change to our dinner habits.

Assess the Situation. Well, I think I can say this has been done, as evidenced by my log this week of all the times we have eaten away from home, and prior weeks of looking at our financial records show pretty much the same pattern. Assessment also requires laying out the reasons why this change should be made, is it a good change, an experimental change or even an essential one? Here are the reasons we’ve determined why we need to change our dinner habits-

-It’s not healthy. Consuming meals with such high concentrations of fat and sugar on a regular basis are detrimental to all areas of our health. Weight gain, high sodium levels, sluggish feelings that leads to not exercising, less restful sleep due to heavy digestion are just some of the consequences of eating these types of food on a regular basis.

-It’s expensive. We are a family of five, and we have an 11 and 12 year old, which means they don’t qualify for a lot of children’s menus anymore. They are ordering off the adult menu, which is already too much food for adults, so its even more food for them, a lot of it ends up uneaten and wasted. Money in the trash. Aside from that, even when they could order from the children’s menu, our check was still pricey for the five of us.

-It’s a bad example for the kids. Teaching the kids that anytime you are tired or feeling a little lazy you hop in the car and head to the nearest restaurant instead of spending some time in the kitchen cooking a nutritious meal is just a bad example. It exemplifies instant gratification and waiting until later to deal with the consequences of bad health and less money in savings or spent on more worthwhile pursuits. It also makes eating at restaurants an everyday occurrence, nothing special. When I was a kid it was such a rare occasion when we went out to eat it was a big deal and so much fun! My kids actually complain about going out to eat sometimes!

-It takes more time and effort. Really by the time you get everyone in the car, figure out where you are going to eat, drive there, wait for your table, wait for your food, eat and drive home, you could have cooked a healthy dinner, eaten it and cleaned up the kitchen in less time.

Planning and preparing for change. Now that I’ve identified the problem, committed to changing and taken a hard look at what the habit is costing my family, it’s time to plan and prepare for change. I know the main reason that we go out for dinner is because me and my husband are tired by the end of the day, forgot to defrost the meat or fish we were going to cook or are just feeling plain ole’ lazy. Armed with this information, I can plan ways to combat all of our excuses.

-Excuse: We are tired and don’t feel like exerting energy cooking. What I’ve done in the past, but fallen out of the habit is preparing my dinner ahead of time. I enjoy being in the kitchen in the morning, so I am going to take advantage of that and start prepping salads, fish and meat in the mornings. I can also cut up veggies, measure out ingredients and make sauces that we will be using for dinner. This will lower our time spent cooking significantly in the evening, and with almost everything already prepared, we won’t want to waste all that effort already put in to the meal.  I am also going to have a few quick preprepared dinners on hand for those nights when we are really tired.

-Excuse: Forgot to defrost the main course. This happens A LOT in my house for some reason. I think this could be remedied fairly easily. I am good at making a weekly menu, on Mondays when I do that, I am also going to set an alarm on my phone for each morning that I need to pull either fish or a meat out of the freezer to defrost for the following day’s meal. Problem solved.

-Excuse: Plain ole’ lazy. This one happens occasionally, but I am rarely lazy, mainly just tired. On the occasion that I just don’t want to cook, period, I am planning on having something super quick and semi-healthy on hand. My kids like the organic hotdogs and chicken nuggets we can find at the local grocery store, and my husband and I enjoy the vegetarian, thin crust Newman’s pizzas. Keeping a couple choices on hand for those nights will be kind of like having a security blanket and will also be cheaper than ordering out.

Reward your successes. Given my original confession, you can see how often we eat dinner out of the house currently. My husband and I have decided we are going to try and make it two weeks without eating dinner out of the house. That’s a BIG goal, considering. At the end of those two weeks, we will go out to eat somewhere, most likely enjoy it immensely, and then try to go for another two weeks. Some of you may be shaking your head at what must seem to be such a small goal, and honestly, I wish we were already where you are if this isn’t a problem for you.  Hopefully over time we will be able to cut it down even further, but at this point, a two-week goal almost seems impossible, almost.

Hopefully this week’s post didn’t leave you terribly disappointed in learning how truly gluttonous we are, but, it’s the truth, and with that realization will hopefully bring change. Maybe this will even inspire you or someone else to work on something else that you may know deep down is not a positive part of your life. Maybe I’ll even check back in after a few months and let you know how this turned out!

What about you? Do you have anything that you’d like to change in your eating habits?