You are here: Home / Declutter / Letting Go of My Alternate Personality and Her Belongings 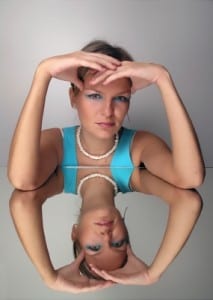 I found myself thinking about my alternate personality the other day, the one that surfaces every few months or so to use the Pilates equipment that sits out in the garage. She also likes to put me on a nice little guilt trip when she reminds me about the pressure cooker that’s been sitting in the bottom cupboard for months, just waiting for me to learn how to use it. Somehow, she is always showing up at times when my regular self is feeling a little inadequate for one reason or another, there to help me pull out all of my ‘should be’ items I have stuffed around the house, and remind myself of who I think I should be, and what I should be doing, that I’m not.

We all have an alternate personality, the side of you that makes purchases based on the ideas you have of who you wish you were, you know, that skilled seamstress with the Serger who sews all her own clothes, or the almost professional home cook that uses a wok like a pro. I used to have lots of items around my house that I just couldn’t get rid of, because they belonged to my alternate personality, the person I wished I was, but felt guilty for not being. Some items I kept around out of obligation because they were a gift from someone else, based on their vision of who I was, or could be.

Getting rid of my alternate personality, or the possessions that create it, was one of the best things I ever did, and continue to do for myself. It released me from self-imposed guilt about not using items I had spent money on that I thought I would use or become the type of person to use them. It allowed me to accept who I am currently right now, instead of feeling guilty about those things that I am not.

Letting go of these items isn’t easy, in fact, they are some of the hardest possessions to let go of, in a way it feels like you are giving up on yourself, giving up on that alternate personality or vision of your ideal self. Here are some thoughts that helped me let go, and accept the real me!

–       Don’t keep items because you spent X amount of dollars on them.   We all spend money on things we don’t need at one time or another. We buy items for hobbies we wish we had, or skills we thought we really wanted to learn. It’s hard to just get rid of those things when they haven’t been used at all, realizing you wasted money, which is really precious time, in the accumulating of them. It’s better to learn to only invest in items after taking much more into consideration before making the purchase, and also to let go of things you aren’t using so others can benefit from them.

–       Don’t keep things because you are sure you’ll ‘use them sometime’. Keeping items around because you think you’ll get around to using them is an excuse we use when we aren’t ready to let go of that alternate person we wish we were. Realizing that you just aren’t going to be a professional home cook, or that you don’t have enough of a desire to learn to knit after all, is not a failure. In fact, you can look at it as an accomplishment, that you are able to be honest with yourself and accept who you truly are, and only keep those things that reflect your true personality.

–       Don’t keep possessions out of guilt. Over the years, I’ve realized that I’ve kept some things like old letters, crafts, books and even pictures out of guilt because they were gifts, or held memories attached to the expectations others had for me. Don’t let others gifts to you control who you think you ‘should be’. If you aren’t the type of person to wear a green quilted jacket, then don’t hold onto it thinking that someday you WILL be that person! If you dread seeing that book you don’t care about reading every time you walk past it, then donate it to the library for someone who will enjoy it’s message. I like to think the person who gifted you the item gave it to you in hopes of increasing your happiness, so if giving the item away does the same thing, I think they would prefer that you relieve yourself of it.

Getting rid of items I thought I would use to form a new habit or cultivate a new skill does not mean that I have failed. It means that I am focusing more on my current life and realize that those items will not bring me joy, or have a positive impact in the present. I like the phrase from the song Turn, Turn, Turn that says,

“To everything…There is a season…And a time for every purpose under heaven”. – The Byrds

Just because you aren’t doing something or using an item right now that you thought would add value to your life, doesn’t mean you can never consider it in the future. There may be a different season when that item will fit better with who the current you will be. Don’t let your alternate personality hold onto it in the here and now, making you feel less than who you are. Let go of it, and if it comes back around later, you’ll enjoy it much more.
So, get rid of all those items you aren’t using, but thought you would or think you should, and by all means kick out that alternate personality along with them! You don’t need her resurfacing to remind you yet again about that salad spinner you bought when you were SURE you were going to start eating fresh greens at least 5 times a week! Let it go…