You are here: Home / Simple Living / Recognizing the Signs of Marketing 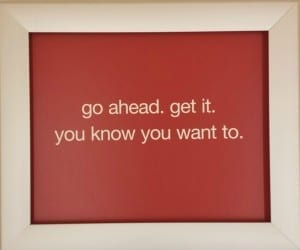 The other day I was in the dressing room of a local clothing store, and turned around to look at the shirt I had on in the mirror, and I came face to face with this placard on the door. It read, “Go ahead. Get it. You know you want to.” Even though I was shopping for some much needed, non-holey shirts, the sign and the message it was sending bothered me. It felt like an assault on my self-control, a blatant call to over-consuming, a direct command to spend my hard earned money and time on anything I may remotely ‘want’ or that they may tell me I ‘want’. As I stood there, I contemplated leaving the store and shopping somewhere that wasn’t so outright offensive with their marketing tactics!

Instead of leaving, I used the opportunity as a time for introspection, and it certainly helped me in my efforts to make sure I only left the store with shirts I really loved and would use. I thought about how many items I have parted with over the last few years as I started simplifying my belongings, and wondered how many of them ended up in my home in the first place because of marketing tactics like that sign. As I considered that, I also realized that part of the reason those tactics are successful, is because most people don’t consciously think about them, or see them for what they are, once you understand the reasoning behind something, it is far easier to see past the superficial aspect of it, like a sign hanging on a dressing room door. Although I am much better at recognizing marketing techniques these days, I came home and wondered what else I was still not aware of was effecting me while shopping, so I did a quick search and came up with these interesting marketing techniques that I had never considered.

Grid versus circular versus free flow store layouts. Grocery stores apparently use the grid layout more often than not, which has consumers moving up and down parallel aisles, with the circular or loop layout is similar to a large racetrack on the outside with aisles on the inside of the loop. The free flow layout is used more widely in shops that feature clothing, where the items are placed all over the floor, but at specific angles to allow consumers to move through the merchandise easily. Customers also tend to turn to the right when first entering a store, so items are strategically placed that promote good moods and happiness at the front area of the store to make for a better shopping experience.

Speed bumps. I didn’t realize that all those end displays in stores are called ‘speed bumps’. Designed to make shoppers slow down and get side tracked from moving on to the next item on their list, speed bumps usually feature items that are popular, seasonal or last minute purchases. Consider the ‘speed bumps’ at stores like Wal-Mart, with those huge cardboard containers and metal cages in the middle of the aisles stuffed full of merchandise.

Along with the three marketing techniques above that I wasn’t aware of until the other day, stores also use the following to entice buyers…

Play music that caters to their specific crowd of shoppers depending on age, sex, time of day and type of product.

Place ‘feel good’ items like bakery goods and flowers near the front of the store, and strategically to the right.

Self-Checkout. Getting rid of the time spent waiting in line eliminates the time you normally would spend rethinking about some of the items in your cart. Allowing you to make your purchases as quickly as possible gets more merchandise out the door.

While I’m not fundamentally opposed to marketing (I realize that businesses do need to make their products attractive to consumers and place them in areas where they will be seen), I am opposed to them going that one step further when they try to TELL consumers that they MUST have something, much like the sign in the clothing store. When they try to instill the feeling of purchasing something at any cost, just because we should have it, almost that we are entitled to it on a whim that is going too far in my book. Recognizing the signs has helped me tremendously as I am shopping, so that I don’t fall victim to the tactics unknowingly. It also helps me appreciate the items I do purchase and to recognize the work that went into the display.