You are here: Home / Declutter / Get Rid of the Good Stuff 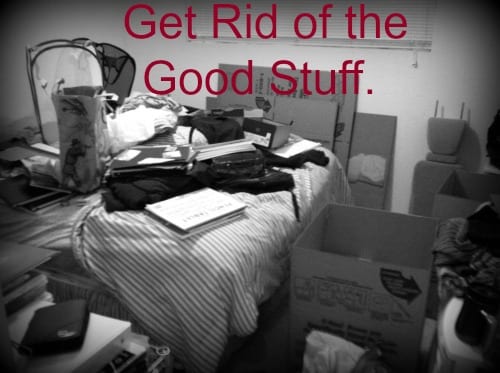 Recently a family member called me wanting some advice on minimizing. First, I was so flattered that she feels I have enough knowledge about it to call me, and second, I was encouraged that maybe my example is helping others. She told me that she struggles with getting rid of items that are still in great shape and could be very useful, except for the fact that she isn’t using them.

Earlier on in life and marriage, a tighter budget necessitated that she scrimp and save and store things away for possible use later if they were still in good condition. However, life changes and she has been blessed with enough means that stockpiling hand-me-downs and duplicate items isn’t really necessary anymore.   Even so, she still has that old habit and fear that she will need those items if she gets rid of them, aside from the fact that they are still in perfectly good condition, and she feels almost like it would be a waste of resources to part with them.

As I thought about her feelings, I realized it is a very difficult thing for most people (including myself) to wrap their minds around, getting rid of things that are still useful and in good condition. I thought more about it, and wondered, why? I came up with a few reasons I think play the biggest part in hanging onto items that we aren’t using-

I spent X dollars on it and it’s practically right out of the packaging!

It is still in very good condition and totally usable.

As I thought about these reasons, my mind went to the ‘self-talk’ I give to myself whenever I am using one of these reasons as a basis for holding onto something I’m not using.

Mind: “Let’s be brutally honest here. If you have been hanging on to this item for years, whatever it is, there is probably a 99% chance you are never going to need it. Just let it go. Give it to a neighbor, friend or local donation center, or even sell it, so someone can REALLY use it and the poor item can live up to its fullest potential!” My personal rule is, if it costs less than $50 to replace, and I haven’t used it in 1+ year, it’s finding a new home.

Me: “I spent good money on it and it’s practically right out of the packaging!”

Mind: “Okay, that was admittedly a poor purchase decision if you bought something and it has barely made it out of the original wrapping. However, think about the guilt you feel whenever you think about that time and money spent, or wasted. Let go of the mental attachment and guilt associated with it and get rid of it!” You can sell it on Craigslist, give it away on Freecycle, give it to a friend, just get it out of your space and you’ll feel mentally better and most likely forget about it within a day or two, not to mention the space you’ll free up in your own home.

Me: “It is still in very good condition and totally usable.”

Mind: “That is great! Someone is going to be so thankful when they come across that item at the local thrift shop and realize they are getting something they truly need and will use, and is actually a nice, quality item. Or that friend you have that could really use it will be so happy that they didn’t end up having to spend their money on the item after all. “ This one thought has been what helps me get rid of items time and time again over the years when I am wavering and feel like maybe I should hold onto something I know I won’t really use.

There is nothing wrong with getting rid of something before it has holes in it, or broken, or pieces missing.

There is more value in donating or selling a quality, usable item to someone who will really need and use it right now, then by keeping it hidden away ‘just in case’.

Free holiday guide for you! Gift-giving ideas for all ages.