You are here: Home / Simple Living / Honor A Veteran-Be Kind 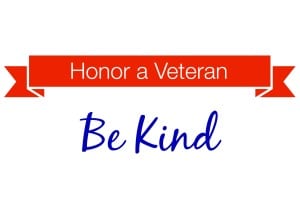 It’s unfortunate we have wars. That’s a bit of an understatement. What is really unfortunate is that as human beings we allow conflicts to escalate to such a point where killing another person seems to be the only resolution. I don’t like to dwell on the fact that most countries keep a reserve of people at all times to carry out this bloodshed if we are not able to solve our problems peacefully. It seems so barbaric when you stop and think about it, and yet I realize it is necessary at this point in our existence for purposes of safety.

Years ago, I worked for a government agency where we focused on guardianship of elderly people who had no family members willing or able to care for them. I was surprised that for many of them, they either had no idea where their family was because they hadn’t had any contact with them in years, or their family members would tell us how awful the person had been to them and they refused to have contact with them. They were all in some type of care facility just waiting out the rest of their lives.

As I had regular contact with our clients, I soon realized a commonality between many of them: they were veterans. Most of the men were veterans of World War II, and some of them of the Korean War. We had one client who had been in a nursing home since he was in his 20’s due to being hit in the head by a large beam while serving in the Navy on a ship and sustaining brain damage. What I also noticed was that as I interacted with these people, a large number of them who had Alzheimer’s were stuck in their war memories. In their old age, they didn’t remember loved ones or happy memories, they relived the most traumatic time of their lives, over and over.

At 18, I gained an up close perspective of the trauma that many veterans experience, especially those that are involved in the actual fighting, and the effects that it has on their mental state and ability to lead normal lives once they are done with active duty. My own grandfather, whom I never met, distanced himself from family in large part because of the mental instability caused by experiences he had during his World War II military service. Even those who are not directly on the battlefield still experience effects of being involved in the war and are changed in many ways for life. Both my Dad and my father-in-law served in the US Airforce during the Vietnam War.

As I have thought about those veterans that I worked with over those few years, I’m sure the majority of them are now passed on, but I have often wondered what the best way is to honor them and their sacrifices. And not only them, but those veterans that are still with us today, like the men in my own family. What I finally came up with seems so simple, but also seems to be the most fitting honor: show kindness. We all have battles in life, usually not huge ones that start wars between nations, but smaller, everyday wars within ourselves, between family members, maybe with someone you work with or perhaps someone you don’t even know that cuts you off in traffic. Showing kindness to those people and in those situations instead of starting a battle to prove you are right will honor those who have sacrificed so much for us in the big wars in life. Having the freedom that we do, we should be using that benefit to deescalate the small disagreements in our daily lives, and keep them from becoming all out war in our families, neighborhoods or workplace.

Imagine a world where people choose to show kindness instead of violence towards each other when faced with a conflict. Over 15 years later, I still remember those men that I worked with and the anguish they felt as they relived their war memories, and my resolve to honor them by not causing wars in my own life and helping those around me live peacefully is still strong.

Today, I think it is fitting to both thank and apologize to our veterans. Apologize that as humans we have not yet figured out how to show enough kindness and compassion towards each other when we face disagreements that we no longer resort to killing and violence. Thank you for sacrificing years of your life and in many cases your mental stability and a lifetime of personal peace to protect us and our safety and freedom so we all don’t have to be involved in the violence. Maybe someday we will be able to honor you fully by ending violent conflict altogether, but in the meantime, I hope those around you wish you a Happy Veteran’s Day and show their appreciation and some extra kindness towards you and others today.

Free holiday guide for you! Gift-giving ideas for all ages.